Does the vaginal microbiome change once pregnant and does it change during pregnancy? Dr. Kjersti Aagaard has developed a test to whether a woman is pregnant or not that’s predictive 98.2% of the time.  The microbiome does change in pregnancy—especially in the posterior fornix—with certain species becoming less diverse and less abundant. “Here’s an example where you don’t have a disease—you have a state of health that is absolutely essential to a species propagating, and the vaginal microbiome changes just by being pregnant…” One of her published studies suggests that the pregnant microbial community is lower diversity and richness with an overall predominance of the order Lactobacillales (and Lactobacillaceae family), followed by Clostridiales, Bacteroidales, and Actinomycetales. The urine dipstick test — or even a glance at the woman in question — still has its merits. Nonetheless, Dr. Aagaard’s work is part of the next frontier in medicine: the human microbiome.

As Dr. Martin Blaser explains in this interview, the first bacteria the newborn is exposed to is from their mother. If delivered via the birth canal, the babies are in contact with the microbes adhered to the mucosa lining their mother’s vagina and, as they’re going out, they become covered by these bacteria. They swallow the bacteria; bacteria adhere to their skin; that’s their initial exposure to the world of bacteria. The placental microbiome likely represents a baby’s first meeting with the microbial world. The birthing process, then, would be the second stop on a tour of the maternal microbiome.

Of course there is breastmilk, which for many decades was considered sterile, but which is in fact is full of beneficial bacteria for the mother and the baby. The breast milk microbiome has been shown to change with lactation, mode of delivery and maternal weight. The presence of oligosaccharides in human breast milk confounded scientists, especially because the necessary enzymes for digestion are absent in infants. Actually, we now think that the oligosaccharides are not there for the baby, but for a particular gut bacterium called Bifidobacterium infantis, which plays a critical role in protection from infection and inflammation.

Vaginal Health is Important for Mom too!

There are many burning questions regarding the female microbiota and it is increasingly clear how critical these communities are for fetal and infant development. Nonetheless, the health of the mother herself is affected by fluctuations her microbiota(s) especially during pregnancy and lactation. For instance, a 2012 study in Cell found that pregnant mouse gut microbiome changes correlate with increased body fat and fluctuations in insulin sensitivity. Mastitis, a very painful maternal infection, is characterized by a 'huge dysbiosis' of the breast-milk microbiome. Thus, it is important to better understand how a woman's microbiota(s) should function in health and why dysbiosis can compromise the health of the mother and infant. 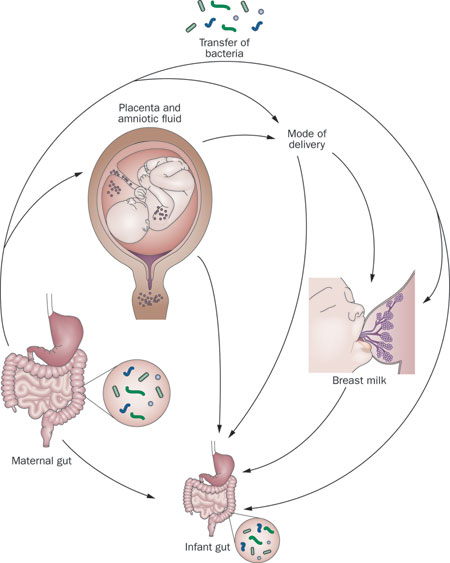