How is the vagina colonized? Many researchers suspect that this occurs during childbirth. But the adolescent microbiome does not resemble that of a sexually mature woman, having far less Lactobacillus, leading some to suspect that there may be a second colonization of the vagina later in life. And if the birthing process is important to establish the vaginal microbiome, what happens in the case of C-sections? “We have more questions than answers,” Forney said.

The microbiome is also not stable later in life. It is now well known that the vaginal microbiome changes after menopause, containing fewer Lactobacillus than the vaginas of reproductive-aged women, with the notable exception of women on hormone-replacement therapies.

Moreover, recent research has revealed that the composition of the vaginal microbiome can change in as little as 24 hours. In 2012, Forney, Ravel, and their colleagues sampled the vaginal microbiomes of 32 women twice a week for nearly four months and found that “communities can change rather dramatically in women in a relatively short period of time,” said Forney. And once again, there are differences among individuals in this regard, with some women’s microbiomes appearing to be more stable that others’.

The temporal dynamics of the vaginal microbiome raise important questions about developing microbiota-based diagnostics and therapeutics, said Forney. “If you perform a diagnostic test, would you get a different result tomorrow or the day after? In some cases, yes. How do you incorporate that into [a] decision about whether some kind of intervention is required?”

The vaginal microbial ecosystem undergoes significant structural changes at various stages in a woman’s life that are directly linked to the level of estrogen in the body.6 Initial colonization occurs at birth, when the infant is first exposed to her mother’s vaginal tract if delivered vaginally, or by the skin bacteria of persons handling the infant in the case of a Caesarian-section delivery.7 While little is known about the importance of this initial colonization event, it is believed to establish the gut, skin and vaginal microbiota, and in the weeks and months following birth, these differentiate into communities distinct to each habitat.7-9 During the first 2-4 weeks following birth, maternal estrogen mediates thickening of the vaginal epithelium and the production of glycogen that is fermented by indigenous bacteria resulting in a lowering of the vaginal pH. This is transitory however, as subsequent metabolism of maternal estrogen is accompanied by thinning of the vaginal mucosa, a reduction of the level of glycogen, and a concomitant increase in vaginal pH.6

During childhood (Tanner stage 110), the pH of the vagina is nearly neutral and cultivation-dependent methods have shown it to be colonized by diverse assemblages of aerobic, strictly anaerobic, and enteric species of bacteria.11-14 Between the ages of 8 and 13 years of age, pubertal changes in the vulva and vagina occur that are induced by adrenal and gonadal maturation. During the maturation process, follicular development causes estrogen production to rise, and once again this is accompanied by a thickening of the vaginal epithelium and intracellular production of glycogen.6 These new environmental conditions select for microorganisms capable of fermenting glycogen to lactic acid and the concomitant acidification of the vaginal environment that is characteristic of reproductive age women.6, 11 Remarkably, the shifts in microbial community composition that occur during this transition have seldom been studied. Using cultivation-dependent methods, Alvarez-Olmos et al.13 found that the vaginal microbiota of many adolescent girls (14-18 y) resembled those of adult women with bacterial vaginosis. Yamamoto et al.15 assessed the vaginal microbiota of adolescent girls (13-18 y) using cultivation-independent methods and observed that the bacterial communities were comparable to those found in adults but remarked that this may not be the case for premenarcheal or perimenarcheal girls.

When vaginal epithelial cells are sloughed in reproductive age women the glycogen present is then presumably metabolized by bacterial populations to produce organic acids; however, as widely cited as this mechanism is it is backed by very little evidence collected from in vitro analyses.16 The resulting low pH (4.0-4.5) of the vagina creates an environment that restricts or precludes the growth of many pathogenic organisms. However, with the onset of menopause, estrogen levels again decrease, and menstruation ceases. This is accompanied by atrophy of the vaginal epithelium and reduced cervico-vaginal secretions.6 In most menopausal women the vaginal microbiota is thought to shift from populations of lactic acid producing bacteria to an assortment of species that include strictly anaerobic and enteric bacteria.17, 18 The dynamic nature of this ecosystem underscores the importance of resolving its microbial constituents at different stages of human development and the prominent influence of estrogen levels in the host on the vaginal environment.

A vaginal microbiota in dysbiosis is associated with suceptibility to infection, risk of post-surgical complications, and negative perinatal outcomes. 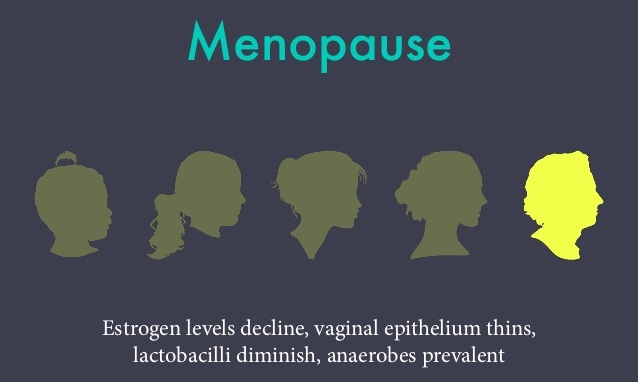